View cart “Nostramus THC Dark Ambience” has been added to your cart.
Sale! 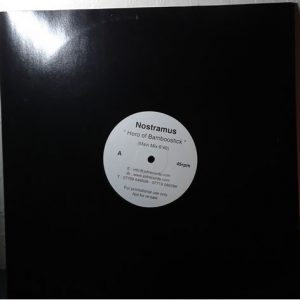 In 2004 Spon teamed up with Jolt Records as both artist in his own right and producer for Jolt’s other atist’s. A rap/grime crew called Check One Two were one of the other artists signed to Jolt and in 2004 Spon asked Mention and Golden Child – Check One Two’s vocalist’s if they would work with him on a new project. Spon had an idea in mind using flamboyant and dexterous rhythms over Kung Fu samples taken from some early ‘B’ movies.
Within minutes of hearing Spon’s idea the two singers were rolling out some fantastically apropriate vocals over the track. The studio in Elstree was buzzing! The Jolt team loved it so much they decided that it would be their first release.
One of Jolt’s other artist’s Dark And Lovely , did a splendid job on a remix which stands proudly in place on the ‘B’ side of the platter.

Signed by Steve Spon on request. Leave a note on the Paypal purchase