Line-up changes in the band through time

The Rezistors 1977/78 with Martin ‘Segovia’ Smith in the middle on guitar, Mick Dove right and Steve Harle on drums.

The Genesis of UK Decay 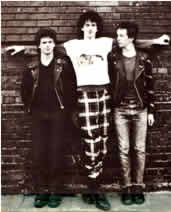 With Steve ‘Abbo’ Abbott on vocals the band were now a 3 piece (Steve Harle drums, Martin Smith Bass, Abbo guitar,vocals). In early 1979, The Rezistors teamed up with another local band Pneumania and played some live shows together. This led on to the two bands producing a single together, the ‘Split Single’. After completing the recording session in April 1979 Abbo announced to the world the bands new name; UK Decay.
The 3-piece line-up only lasted 6 months until October 1979 with the inclusion of Steve Spon guitar formally with Pneumania relieving Abbo to concentrate on vocals although occasionally picking up the guitar.

Now with Steve Harle drums, Martin Smith Bass, Abbo guitar/vocals and Steve Spon guitar we enter the early classical UK Decay line-up lasting from October 1979 until the departure of Martin Smith in January 1981. This line-up recorded 3 singles (The Black Cat EP, For My Country and Dresden/Unexpected Guest) and as well as touring with ‘The Dead Kennedys’ on their first UK tour toured extensively in Europe and the UK. The remaining 3 would continue together up until the end at that auspicious ‘last day of 1982’ gig at the Hammersmith Klub Foot.

Lol Turvey on the left

The departure of Martin Smith led to a 6-month period in which UK Decay had problems in finding a permanent Bassist. As there was a European tour arranged Loraine Turvey stood in on bass. Loraine (‘Lol’) Turvey’s period with UK Decay lasted only a couple of months but in that time the band had played some significant shows in some of Europe’s main capitals and had started to get some real media attention. The photo on the left was included in the first ‘front page’ for UK Decay in the UK music rag ‘Sounds’. Lol however had commitments and went her own way. 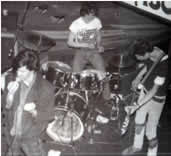 UK Decay at the Taboo Club, Scarborough, May 1981 Creetin on right

Early spring 1981 saw UK Decay again without a bass player, however Steve, Abbo and Spon were busier than ever. They were writing and recording material for the first album at the same time they had a tour in April of that year planned in the USA. Creeton Kaos vocals with the US west coast hardcore punk band ‘Social Unrest’ stepped in on bass for UK Decay for that tour. Creeton returned with UK Decay to the UK and played bass for the band on their first major headlining UK tour he also recorded material for the album.

Eventually Creeton Kaos returned to the US and UK decay was yet again without a bassist. Eventually in July 1981 Edwin ‘Twiggy’ Branch from Northampton stepped in and invigorated a weary UK Decay. This line-up is remembered by many as the ‘Classical UK Decay’ and continued to the final demise of UK Decay on that last but one day of 1982. With the inclusion of ‘Twiggy’ the band completed the recording of the Album (For Madmen Only) and went on to record the ‘Rising from the Dread’ EP as well as touring extensively in the UK and Europe.

This UK Decay line-up with Steve Harle drums, Edwin ‘Twiggy’ Branch bass, Abbo guitar/vocals and Steve Spon guitar had persevered 18 months from July 1981 to December 30th 1982. The final gig on that day was recorded for posterity and came out as a post-hummus cassette album release, ‘A Night for Celebration’ which was released in early 1983.

Steve Harle, Edwin ‘Twiggy’ Branch and Abbo continued together recruiting a new guitarist ‘Patrick’ first of all and changing their name at first to ‘Slave Drive’ and or ‘Meat of Youth’. Later in 1983 Patrick was replaced by ex Gene Loves Jezebel guitarist Albie de Luca and the name was changed to ‘FURYO’.