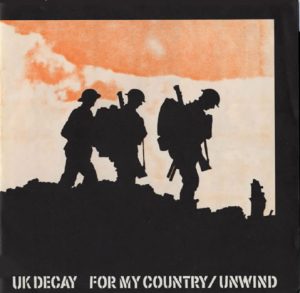 For My Country DK 1983 on UK Decay Records

For My Country/Unwind 1983,  7″ Vinyl single
UK Decay Records DK3
“It is for the honour, I don’t ask why, its my pleasure my honour to die – For-My-Country”

UK Decay’s ironic take on war, jingoism and patriotism as pertinent today as it was back in 1980.

For My Country/Unwind was UK Decay’s third single and their first official release for Fresh Records.Issued in September 1980. “For My Country” received airplay from John Peel (for whom Decay would record two sessions) and spent eight months in the indie chart, reaching No. 13. The single was promoted by a major UK tour with San Fransiscan hardcore punk band Dead Kennedys. The For My Country T Shirts design from the front cover of the record with the soldiers became an iconic image easily spotted in a crowd. Both For My Country and Unwind became staunch favourites in the UK Decay live mosh back in the early period and so it still was in the recent period live performances.

A Side: For My Country
AA Side: Unwind