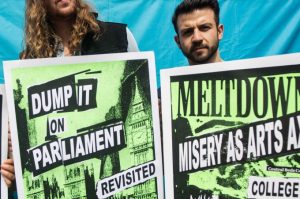 Join us on Monday 20 June 2016, 8.00pm at Leighton Buzzard Library Theatre for the Dump it on Parliament Revisited wrap party.On the night you will get an exclusive listen to the new post-punk compilation Dump It On Parliament Revisited before its public release on Friday 24 June.The album, which was recorded live last year at Leighton Buzzard Library Theatre, will be played alongside the first screening of the accompanying documentary film that explores Bedfordshire’s flourishing 1980’s post-punk scene. It tells the story of how many local post-punk bands joined the fight to stop a proposal to make a nuclear waste dump at Elstow, near Bedford and is meshed with interviews and footage from the creation of the new Dump It On Parliament Revisited compilation.

There is a bar available on the night and the previews are followed by a share your own vinyl and tapes night. So bring your old punk favourites and step back to the 80’s!

The event is free but booking is advisable.  To book call Leighton Buzzard Library Theatre Box Office on 0300 300 8125

Read more about Dump It On Parliament Revisited

Dash Macdonald and Demitrios Kargotis have been working in collaboration since graduating from the Royal College of Art. Through public performance, creative social experiments and humorous interventions, their practice explores and exposes the effect of existing socio-political systems and institutional mechanisms. Their work has been exhibited in Dundee, Berlin, Athens, Helsinki, Bucharest, Istanbul, Tokyo, Linz, Zurich, Zagreb, Gijon and London.

Roshi is a composer, singer and sound artist who creates new works with people using sound, singing and the power of language and memory. She is known for her much acclaimed “experimental, electronic Welsh-Iranian folk pop” project Roshi Featuring Pars Radio with prolific percussionist/producer Graham Dowdall (Gagarin, Pere Ubu). Roshi has received several commissions including the Belonging exhibition at the Museum Of London, BBC Radio 3’s The Verb, So & So Circus Theatre, Birds Eye View, the Southbank 2012 WOW festival and the British Council for whom she presented major public sound art pieces in Kuwait in May 2014. Roshi, who grew up in Wales to Iranian parents, is based in London.