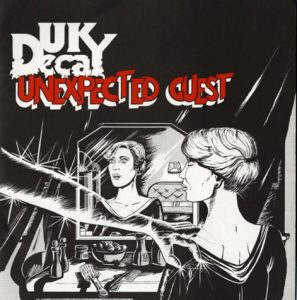 When originally released this record soared high in the independent charts reaching number 4 and remained high in the charts for over twenty weeks. The T Shirt designed for this record was worn by the character ‘Rodney’ in the ever popular British Sit Com ‘Only Fools And Horses’. A second recording of the track Unexpected Guest later appeared on the For Madmen Only Album later in 1981.
‘Dresden’ became a major anthem in UK Decay’s live show summoning up the swirling Luton studded belts in the mosh and by Abbo onstage. By today’s standards a elf and safety nightmare but for the show it was a spectacular interaction of tribal comradary.

A Side: Unexpected Guest (Single version)
AA Side: Dresden