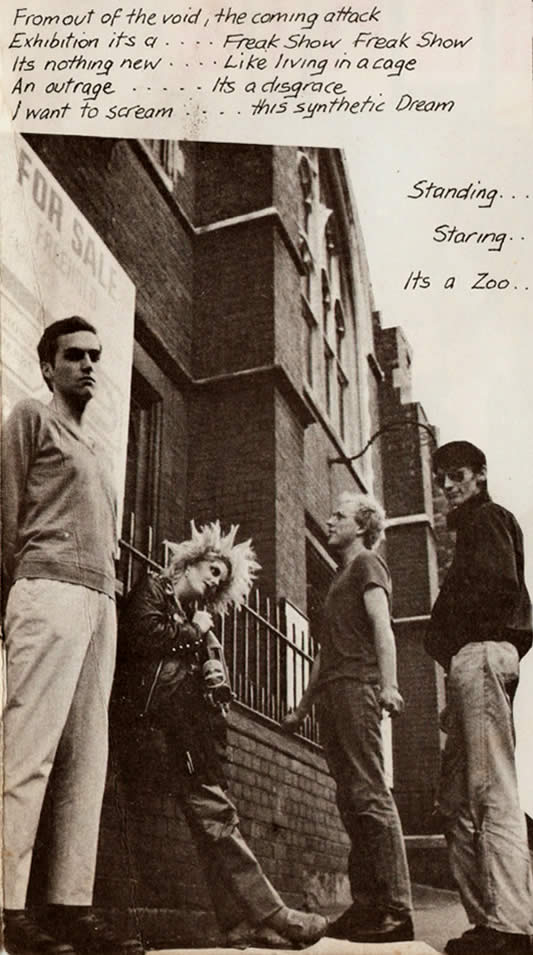 An excerpt from “The Luton Punk Scene”..an interview with Steve Spon

Is it right that a couple of uk decay songs were actually re-worked Pneumania numbers? Which ones were they?

Yes, Music-wise obviously, Abbo of course put some new lyrics to a couple of tunes that I had written. Previously they had been worked on with Pneumania. The songs will be familiar to those who have heard ‘The Black 45’, they were ‘The Black Cat’ and ‘Message Distortion’

Anyway, it all ended when you left for uk decay. Did they invite you or did you offer your services?

Aha! That’s a question. Pneumania were a ‘temperamental’, ‘finicky’ beast to say the least. There were several factors that lead to the situation of me leaving Pneumania and joining ‘Decay’. There was I suppose a frustration on my behalf with some of the other members lack of serious attitude when it came to things like rehearsals and eventually gigs. I would literally not know whether certain people were going to turn up or not.

The Split Single had given us a great opportunity to progress further, we were getting offers of gigs left right and centre and we were trying to write new material for the Pneumania follow up to the ‘S.S’ But unfortunately certain members didn’t seem to get it!

I think that Abbo and the boys could plainly see what was going on and saw how they could turn the situation to their advantage, so they asked me to join them on guitar.I could see that they were dead keen to move on; I weighed everything up and took the offer.

Difficult decision or was it obvious uk decay had more potential? How did the rest of Pneumania react?

No , at the time it seemed an easy decision for me although it wasn’t easy breaking the news to the other members of Pneumania. Steve the Voice (bless his heart) was the most disappointed. Nigel had already done a disappearing act and Gaynor was smitten with personal problems anyway. I think however that they all respected my decision to leave the band and join up with UK Decay.

Did you ever see “Pneumania mark 2” that Steve the Voice put together later? What did you think of it starting again without you or snow?

I saw them at Barnfield College in 1980/81 I think with new drummer Dave Sidley new vocalist Elaine O’Brian and on guitar Pete Keady (I think!) Steve of course was on Bass.It was something else witnessing a baby that I had helped to create, playing some of the tunes we used to play! They had a great sound and it’s a real shame they didn’t go any further and record some of their stuff.

I had no problem at all with it, I only wish that I had more time to help them somehow but we by that time were up to our necks in our own work. I have often wondered whether there were any half decent recordings of their music. I have absolutely no idea why or exactly when this line up finished though. 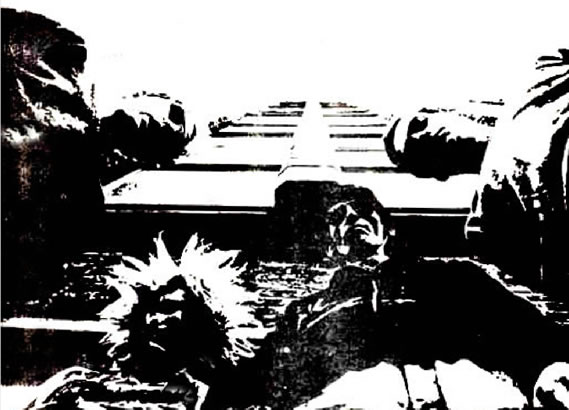 Myself, Captain B and bass player Steve the Voice in early 79 formed a new band with a girl singer and we called ourselves ‘Sno White & the sic punks’ ! Sno White also known as Gaynor G. was well known for her ‘Jack Frost –bleached white hairdo. She looked amazing!

Initially it didn’t matter if she could sing or not, that wasn’t the point, its what she had to say that was important. Our rehearsal room was now in action and by now The Rezistors were rehearsing there as well as ourselves. This brought the two bands closer together and we talked about pooling resources and doing shows together eventually leading on to the ‘Split Single’ release in the middle of 79.

A new Barnfield College show was planned and the two bands were to support ‘The Jets’, but there was a complication! ‘Captain B’ was by that time also playing Bass guitar for the Jets. There was no way The Jets would tolerate such un-loyal behavior. He was playing drums for us, we knew but The Jets didn’t. The answer was for Captain B to dress up as an Egyptian mummy for our show. Trouble was that during the set the bandages slowly became unraveled, revealing the embarrassing truth for all and The Jets to see!

Sadly the next day that led to unfortunate incident in the Grapevine whereby Captain B got thrown down the stairs and out of The Jets!

This incident ‘fractured’ the local punk scene in as it turned out a positive way, there was now a race on between the two ‘camps’ to release Lutons first ‘Independent’ record.

It made us realise that by pooling resources between the 2 bands we could achieve that goal. We needed about a grand to do it and at that time that was a lot of Dough but by splitting the costs between many it was achievable.

The race was on! The Jets had recruited ‘The Klips’ and as it turned out their own cut on a split single. From the ‘incident’ to the final release of our ‘Split Single’ took about 12 weeks of concentrated effort and teamwork. In retro we made a few mistakes we thought we could save a bit of money by stamping the labels ourselves but that turned into a nightmare! But we learnt the method as we went along.

By this time I was doing a van driving job which took me to nearby towns, one day whilst in Northampton I came upon this punk record and clothes shop ‘Acme’.

It looked interesting so I went in and got chatting to the proprietor. It turned out that they promoted gigs in Northampton and managed a local band called ‘Bauhaus 1919’. I suggested a ‘swap’ show between our 2 bands having Abbo on the SU was a good move,

So it was arranged.

The Rezistors and ourselves were to support Bauhaus at the Racecourse pavilion in Northampton and in return Bauhaus 1919 were to support us at the Luton SU! That was to be our first out-of town show

The Split Single came out in the summer of 79 and by that time the Rezistors and Sno White had changed their names to UK Decay and Pneu-Mania. The SS quickly sold out and was re-pressed mainly thanks to a damming review in New Musical Express.

UK Decay were thriving now and going from strength to strength however my band PneuMania was languishing with ‘personal’ problems.

It wasn’t long before Spon left Pneumania to join UK Decay in September 1979.
Sno White and Nigel Dark wandered off but Steve The Voice put a ‘new’ Pneumania together… ‘Pneumania 2’ 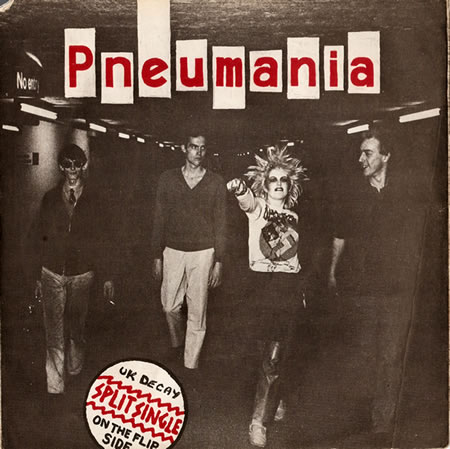 The Split Single, Pneumania side