Back in the day UK Decay had a love hate relationship with the local and national media.

The mainstream music papers in an age before the worldwide web and MTV had taken hold were an awesomely powerful influence on the music scene. This was about to change.

The Punk explosion of the late 1970’s had shaken the core of most of the music business, including music journalism. Out went the ‘old guard’ and eventually, in came the new.

Plastic Records, UK Decay’s label on the release of the Split Single, sent the main UK music rags a copy for review. This was the bands first venture into the world of music media; they were soon in for a shock! 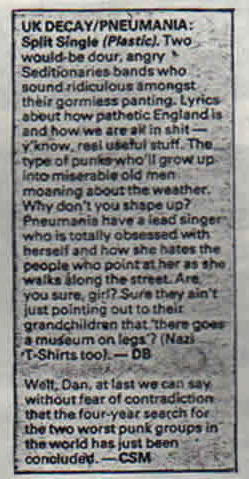 In the summer of 1979 as the Split Single was rolling of the production line, Charles Shaar Murray and Danny Baker were charged with the weeks single reviews for the New Musical Express. They reviewed the Split Single and had given UK Decay and Pneumania, the two bands featured, a right ‘slogging off’! CSM had finished the rollicking with

“Well Dan, at least we can say without fear of contradiction that the four-year search for the two worst punk groups in the world has just been concluded”

Within hours Rough Trade and other suppliers were on the phone re-ordering. Within a week, the entire first print of the record had sold out!

In true Punk style, the two bands had shown up the two journalists’ for what they were, in the eyes of the bands they were very definitely ‘old guard’!

However, in the case of the NME, it was to be another couple of years and a change of staff, before they were ready to deal with UK Decay. Meanwhile the band embraced the world of DIY culture and namely, fanzines, almost totally turning their backs on the mainstream press.

By late 1980 and after several releases and tours with the Dead Kennedys and around Europe, things started to change. In early 1981, Sounds journalist Steve Keaton accompanied UK Decay on one of their European tours. He was to write an article for the rag, being one of the first of a new generation of ‘Rock Journalists’, recruited to boost the then ailing rag’s fortunes. The band felt at home with Steve Keaton on that tour and had found they had a lot in common with him; the result was “The Face of Punk Gothique” interview, credited by many as the birthplace of the name, ‘Goth’. This was not immediately apparent however; it was like a ‘depth charge’, emerging a few years later as a seminal point in the birth of the Goth movement.

By mid 1981 UK Decay were doing a fanzine interview nearly once every week and were being taken notice of, increasingly by the mainstream press, noticeably, by at first Sounds and Zig Zag magazine. New Musical Express and Melody Maker however would only comment from time to time almost begrudgingly on the band, it was only a matter of time before they too were recruiting ‘new blood’ in the name of journalist Richard North, who wrote for New Musical Express. Richard wrote the article “Luton and Burning” in 1982, quite late in UK Decay’s career.

By the demise of UK Decay in late 1982, and after that, early in 1983, the band had become front-page news in the mainstream music press as well as myriad of fanzines.

It pretty much sums up the irony of UK Decay, that only after the band had finished, where they ‘worthy’ of making their first front cover as depicted by UK music rag; Sounds, early in 1983.

Following that, attention became more focused towards the ‘offspring’ bands, Furyo and In Excelsis. It was nearly a decade in around 1992 that interest in UK Decay became rekindled, perhaps the release of former Zig Zag and Melody Maker journalist, Mick Mercer’s ‘Gothic Rock’, which featured a lengthy interview with Abbo, played a part in this new interest by hoards of second generation ‘Goth’ enthusiast’s.

Since, there has been an increased interest from book, magazine and fanzine writers, with one lengthy interview, this time with Steve Spon in Ian Glasper’s, ‘Burning Britain’, another by Spon for ‘The Mick’ (Mick Mercer’s Webzine) and recently in the summer of 2006 for the USA ‘Drop Dead Magazine’.

Presented here on this website is a growing collection of some of the best ‘press moments’ on the subject of UK Decay, by no means is it complete, but it is being added to all the time. We thank all those who have contributed article scans in the past and are optimistic that more will turn up in the future.

Some of the articles have been fully text transcribed; others are scanned as in their original form in the various Galleries. Attention has been paid, to create the gallery images at a size that is ‘text readable’, if the text is too small to read, click the image to reveal a text readable version!