The following is a transcription of the 18th December, 1982 ‘New Musical Express’ ~(NME) by Richard North

“UK Decay –The cult that came before the cult”

My friend, come with me into the forest tonight deep down into its heart where there is a clearing. Yes here, where the heat howls and the electric tension crackles all around until you are lost, alone, in the sizzling atmosphere. Suddenly thunder and lightning shatter the gloom illuminating some sort of path; an escape. It begins to rain, a cool refreshing rain. Yes, as the saying goes, sometimes you’ve got to lose yourself in order to find yourself. Now, come and meet UK Decay my friend….. 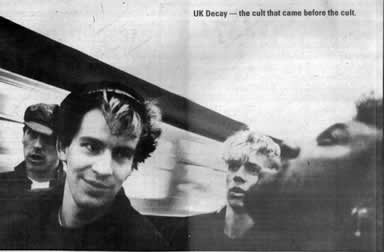 The band have been working for three years now as the purveyors of a heavy, harsh and sometimes discordant musical style that has suddenly been picked up by the likes of The Sex Gang Children, Danse Society and Ritual and made into a cult.

Further more, the black, almost mystical imagery has also been echoed – but whereas some of the siblings seem to use the darkness purely for stylistic effect, portraying only the superficial, negative values, the men from UK Decay – Abbo, Spon, Steve and Eddie – amplify the shadowy trappings in an altogether more optimistic way.

‘Out of the darkness. It’s a battle that’s been going on in the human race since man first started scribbling on walls. Man is infatuated with extremes – good and evil, light and dark – a lot of people will see us as evil and menacing whereas its quite the opposite. What we are in fact saying is that you’ve got to choose for yourself. Every individual has got to choose his own right or wrong and face the consequences.’

Spon talks about the concept of individuality with pride; the band, in his eyes, are the manifestation of this ideal. They’ve fought their way out of the wastelands of Luton with no manager or record company, basically doing it all by themselves until now, with their records selling well and their gigs selling out, they’re a force to be reckoned with.

Spon gushes excitedly, ‘It’s within everybody to do something. They can either go ahead and perform these instincts or they can sit back, get depressed and do nothing or maybe take drugs to subvert the natural need to go out and progress. It would be good if everybody stood up and thought, well, I am…me! I don’t believe in all the shit; authority, government, communism, capitalism – its basically down to the old human ideal of coping for yourself.’

The UK Decay line of thought appears to go through and beyond the heartless politics that are woven around people’s lives, keeping them in the dark, as it were. Theirs is a basic, day to day view of reality but one charged with an optimism and flair that in its simplicity seems mysterious. Which is, after all, what mysticism is all about; the return to a basic, underlying, but hidden motor-current.

It’s a current that UK Decay seem to have tapped. Their later records reflecting that power – especially the last one, the ‘Rising From The Dread’ EP, an exciting and invigorating spark of creative noise. ‘Testament’ is the standout track and the one that sums up their positive tone.

“Walking through the garden, the garden of temptation, tempestuous youth seeks the testament of truth”

quotes Abbo, the cheerful, extrovert singer. ‘Youth has always been a time for rebellion.

Everyone rebels in their teens but settles down later – its bullshit. Their power is diluted by various apples in this garden of temptation – join the SWP, join the NF, join the ANL…religion, whatever. Its like a garden where people find their reason to exist by joining organisations; living to become part of a group to justify their self-existence. All you need is your own conviction, its got to be an inner feeling – ‘But when rebellion’s the cause, like a Spartacus its yours,’ he finishes the quote.

Rebellions may come and rebellions may go but human aspiration for individuality and light remains. UK Decay have rejected both faith and reason as the ultimate answers to the problems of existence. Faith because it may be a faith in the wrong god or wrong teacher. Reason because it cannot get beyond the permutations and combinations of its own axioms. There only remains the method of experiment and mystery.

The path out of the forest passes through this way…