“Dump it on Parliament”: 1986 Luton Compilation

(In support of Bedfordshire against Nuclear Dumping campaign: B.A.N.D)

How Luton’s 1986 alternative community helped defeat the governments plans to dump nuclear waste in nearby Elstow.

UK Decay, Furyo and In Excelsis were gone but in their wake, the town of Luton still had a bustling ‘alternative’ scene in the mid eighties. At the time, Click Click, Karma Sutra, the Party Girls, Penumbra Sigh and a host of other acts were ‘wooing’ the local audience’s. Click Click were pioneering new industrial sounds at their Lung Function HQ and Karma Sutra were flying the flag for the ‘anarcho-pacifist’ movement. Both bands were regularly playing gigs out of town and around the country, even playing in Europe by 1986. 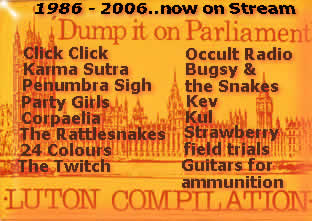 Thatchers contentious government made great issues to protest against during the post punk 1980’s notably the Falklands adventure, the Miners strike alongside a myriad of other matters. So in 1986 when it was announced that an old World War Two supply base near Elstow in Bedfordshire was to be the host of the nations nuclear rubbish dump, it was decided that something had to be done to try and stop it.

The focus for the towns alternative community at the time was centered perhaps predictably at the ale houses such as the Blockers Arms and The George etc and at the 33 Art Centre in Guildford Street. Just round the corner at Bute Street was situated the printing workshop where Luton Band Click Click’s ‘Lung Function’ rehearsal rooms for bands was situated. Both ’33’ and ‘Lung Function’ provided rehearsal spaces and acted as informal networking spaces for bands and like minded people to gather. Luton at that time had quite a vibrant alternative musical community.

So when the government announced plans to dispose of nuclear waste nearby it was relatively easy to galvanise the towns alternative community into an action. The disaster of Chernobyl was fresh on everybody’s minds and with this a campaign was started – Bedfordshire Against Nuclear Dumping (B.A.N.D.) Most of the towns young ‘alternative’ musicians got behind the idea quickly and very soon the idea of a protest – compilation tape would be in order. Bands and individual musicians were asked to contribute a specially written and recorded song or two, protesting against the Governments nuclear agency – Nirex.

In the mid Eighties Government Policy determined that a site in Mid-Bedfordshire near Elstow, was to become a major national and an international nuclear-waste dump. In true do it yourself  punk-spirit, the Luton alternative scene galvanised their protest against Nirex, the government agency responsible for nuclear waste.
A 24 track Tape was produced which included works by many local artists.
Presented here are the digitized cover scans for the tape and below that, you can download the MP3’s:-Having no budget available for studio time, the contributing bands were asked to stump up their own recording costs. The real hard work was holding the idea together until the project was achieved. Most of the tracks ended up being recorded on a 4 track cassette porta-studio as this was the only method that could be afforded at the time.

The fold out front to ‘Dumping It on Parliament’

The process seemed to take forever and at times the project nearly ground to a complete halt. But eventually the tape was finished. According to the hand written text on the back of the Cassette,

“This tape was put together on very cheap equipment, nothing flashy at all. So obviously the quality suffers somewhat and for this I apologise not only to you but to the bands and artists that have contributed their songs and their time completely free. Although it hasn’t quiet turned out as good as it could have done, I think it still proves that anyone can produce D.I.Y. Tapes easily and cheaply. Without the help of the money merchants that control the major record companies but simply with a little trust, solidarity and cooperation.”

The fold out rear to ‘Dumping It on Parliament’

Profits from the project were to..

However for some inexplicable reason it tuned out that soon after the tape was released, the government did a ‘u-turn’ and dropped their plans for Elstow. The whole country in the wake of Chernobyl was up in arms against the nuclear industry! So it was victory for the aims of the campaign but now the original purpose of the tape compilation was defunct.

This may have taken the wind out of the sails for the project at the time but today this collection stands as a historical snapshot of Luton’s alternative musicians, community and culture of the mid-late eighties. In 2004 one of the original artists to have appeared on the tape, Bugsy – digitised and sent the UK Decay Com website the MP3’s to host, which we have hosted to this day, now twenty five years after it was originally released. In 2006 Spon re compiled and remastered using another recently found copy of the original, selecting the best quality to have survived the years of each track on the tape.

So thanks go out to Bugsy, Spon and Ella Jo for the BAND poster and of course all the bands and artists that contributed to this historical and unique Luton collection. So here it is!

Stream all in windows media player.

A radical view of Luton’s anarchic past
Straight outta Luton

“Alternative Luton – Grab it, Change it, it’s yours!” 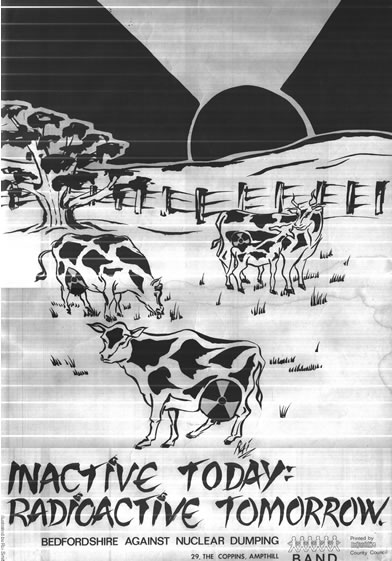