IN Excelsis Discography by Paul Rabjohn

Produced by Roy Rowland and In Excelsis at Nagasaki Studios,  London Aug 1983. Cover by Jean

Tracks: The Sword / Vows (Initiation) / One Man’s Heaven / Carnival of the Gullible 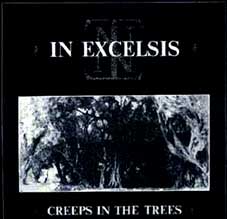 Creeps In The Trees – front

Creeps In The Trees – View Larger

The only otherwise unavailable tracks I am aware of are ;

“Vows (live in Heaven)” appears on the Cherry Red DVD “In Goth Daze”. This is still in print.

There are a few tracks on the “Gothic Rock” type compilations , don’t have details on these to hand.

All these recordings had the one line-up , Spon (ex-UK Decay) on guitar , Errol Blyth on vocals , Mark Bond on bass (both ex-Ritual) and Roxy on drums. Prior to In Excelsis Spon put out a few records with UK Decay (as you are doubtless aware , there is a full discography on this website). Ritual released 2 singles (Mind Disease 7” and Kangaroo Court 12”) before splitting when the drummer and guitarist quit to join Death Cult. There is an unreleased album (“Songs for a Dead King”) in circulation as a bootleg.

Post – In Excelsis , Spon has continued to release records with (amongst others) Click Click , Big Eye and Nostramus. I don’t know of any releases by the other 3 band members.

Return to In Excelsis Home