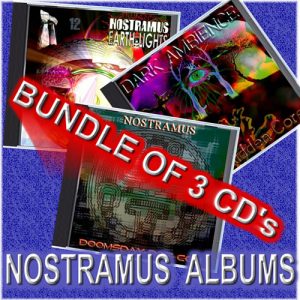 During the early 1990’s, Spon witnessed the excitement of the unfurling drum’n’bass scene, musical horizons expanding rapidly and new beats opening whole universes to explore. His first album Earthlights was released in 1996 in the UK followed a year later in the USA. Obtaining some excellent reviews the album released many tracks to various compilation albums during the late 1990’s. Earthlights utilizes futuristic samples merged with at times dark and glassy atmospheres, buzz saws with glissando, deep throbbing sine basslines that descend into leviathan like landscapes. Then the re-emerging themes morph into pagan verse and intellectual cabbage’s with horse ring through the night like beings from another world!

This album is a ambient-dub, drum and bass revolution and in the words of one observer, “probably the best drum and bass album you have never heard”

The Dark Ambience Project album is a spin off project by Nostramus. It’s moody and broody, a feast of soundscaped nightmare visions and eclectic journeys. Culled from the darker psychotropic-fuelled imagination of the Big Eye, Bud Brothers and Nostramus’s Steve Spon – edited and re-mastered in 2010 from tracks originally recorded from 1990 – 1996.

The fantastic Doomsday Dot Com by Nostramus is a prophetic gathering of Drum and Bass tunes and samples. The album is a tapestry with a strong musical current, including samples which expose media hysteria amongst other, lighter themes. The album itself is a comment on the phenomena that shape our early 21st century; times where fear is founded for some, and a plaything for others. He exposes the human responses to dealing with a world that we cannot control including elements of superstition, anger and the need to release stress in a musical whirlwind of joy. Nostramus encompasses all these emotions, waltzing the listener through a reality check – reminding us to question our distorted world, keep our feet on the ground and trust our senses. The delight in this work is the unceasing movement between light and shade, the highs and lows, the scowls and the smiles…..Was Drum and Bass ever supposed to go this deep?