Furioso – a book by Raymundo

For the next few weeks it will be available at the sale price of just 0.99 pence. 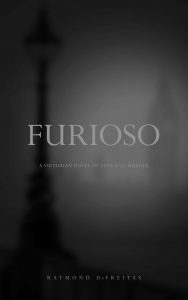 London 1890. A debutant strung from a gas lamp; an MP garrotted in the street; a student back for the Christmas holidays crucified to a door. Each one the daughter, brother or son of a different factory owner; each body pinned with a simple message scrawled on a five-pound-note: Submit or die.

The city is already in uproar as the authorities use ever brutal tactics to put down worker strikes, with the rioters held responsible for these terrible crimes. But the authorities are wrong. They are the will of just one person, a man at the head of a vast and unseen criminal empire. A broken genius haunted by the death of his one true love many years earlier.

He kills to seek redemption. And as he unravels, only two people can stop him: a policeman fighting his own private war, and his brother – who must eventually face an awful choice