Some of you may be wondering who is the new guitarist that has recently replaced ‘Johnny G’ who departed earlier this year. Justin “Justinhio” Saban has made appearances at the recent ‘Scum’  and ‘Rebellion’ Festival’s in the UK. Passport issues prevented his appearance at the ‘WGT Festival in Leipzig.

“We were all disappointed that guitarist Johnny G decided to quit the band for ‘personal reason’s’ earlier this year – we would like to wish him all the best for his future plans.
Justin will now help fill out our sound, he has great technique and with the feedback energy of the Decay sound together, will help ignite our performance”
say’s guitarist Steve Spon 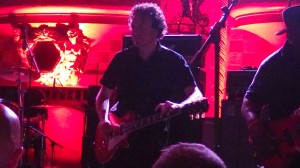 Well known on the Luton scene as a recording engineer, Justin has also worked at studios such as Fortress and Southern in London, being heavily influenced by the techniques and punk ethic of John Loder and Steve Albini. As well as championing Luton bands through his Latent Lemon label, he has also recorded many alternative/post hardcore/punk bands.
Justin was re-introduced to UK Decay’s music while working on the Wonderful Town EP, and was hooked, he just had to join the band!
Although discovering in his teens the joy of experimental guitar noise and building fuzz boxes, Justin bizarrely started off gigging properly by playing jazz and big band with folks from Ronnie Scott’s and Humphrey Lyttelton’s bands. However it wasn’t long before the need to make a healthy distorted din enticed him into playing with Luton band Walking On Ice. After leaving WOI he mostly retreated into the studio, producing and playing guitar on many recordings.
Justin owns Latent Lemon Audio and also designs and builds effects pedals, and is an all-things-guitar-and-ampy boffin. You can stalk him at: www.latentlemon.co.uk and
www.facebook.com/latentlemon