As gigs go this wasn’t really the usual UK Decay experience. When Franko asked if we could step in at the last minute to replace the mysterious Revelator, we asked what sort of night he was planning.

Simples we think, and load up Jon’s Volvo for the fairly short trip from the blessed holy lands of Lutonia to South East London. Ed was making his own way down and Abbo was hightailing it in from Chester. Jon was in his usual mad driver mode, and so Spon and me spent the majority of the trip with our eyes shut and praying we’d make it in one piece.

The venue was an old pub in Camberwell that’s been converted into a swish bar. The landlord is well in with the art crew and hosts lots of leftfield events there, including regular fetish nights apparently. We bowl in and find Chairman Che and Marsha already there and doing the business. Today Che’s smoking small, thin cigars, rather than the Zeppelins he usually prefers.  We set up and sound check. Things are sounding good. We’re just playing through the backline and a vocal PA, today but there’s a lovely crisp urgency to the sound.

Franko and his crew are already in attendance – as are a selection of London’s finest performance artists. To be fair, some of it went over our heads. In fact, most of what was going on went over our heads – a great deal of which seemed to involve nakedness and gaffer tape. But everyone there was engaged and respectful; the ideas well executed.

As well as being a great artist Franko was singing in the first band due on that evening: At Night We Cry.  While they sound checked we cleared off to a nearby café to drink beer, eat food and talk about next moves – possibly another record. Che reported back on gigs booked or being planned: which at the moment include a big London show later this year, then jaunts into Spain, Poland, Germany and more. We’re adding shows by the day and once everything is signed off will be putting up the dates. The sun was hot and the beer was cold and it was the first time in ages we’d been able to just sit around and hang out – which was great.

So back to the venue in time to see Franko do his thing. At Night We Cry are a three piece: drums, bass and Franko on vocals and FX. Considering there are just three of them they make a great racket, lots of heavy, monstrous grooving between the rhythm section and Franko doing his nut through effects laden vocals. Hopefully we’ll be playing with them again in Italy later this year.

And then to us. We only had to play for 30 minutes so did the same set as we had outside Rough Trade West a few weeks ago:

It’s probably the first time the band has played in front of an audience who has never heard them before. Although Steve and Lee did manage to get down to see the show. It was a good show: tight, energetic and powerful – the usual Decay ingredients minus the swinging belts. Before we knew it, the night was done. A few beers and then a face from the past: Phil Keefe from Luton who made the short journey from his new home in SE London, but arrived 30 minutes after we’d played.

Time to head back. Spon and me looked at the Volvo with trepidation. As I was navigating from the map on my phone, I drew the short straw and had to sit in the front.  I shut my eyes and prayed!

UK DECAY will replace REVELATOR and play in June’s edition of UNTOUCHABLE at The Flying Dutchman, Camberwell, London on Saturday 8 June 2013.
There was only one answer when Franko contacted the band to fill the gap left by mystery band REVELATOR, who pulled out of the show at the last minute without explanation.
Indeed, Franko will be spreading his own hot sauce fronting his band At Night We Cry in-between curating the event for performance s p a c e [, which concludes their I ♥ ]ps[ fundraising campaign.
Performance/ Live Art will start at 2pm sharp and run until approximately 8pm.
The live music will start at 6 pm with At Night We Cry, followed by UK Decay at 730pm
DJ sets by Franko B, Abbo’s alter ego, DJ Lovechild and DJ MU to finish the night..
Artists: Dani Ploeger, Kimberley Emeny, DUG (Ross Oliver, Joana Cifre-Cerdà and Kate Buckley), Season Butler, Verity Combe, Laura Dee Milnes, Elenor Hellis, Lorena Lo Pena,Valeria, Tello Giusti, Bruno Humberto & Abraham Winterstein, Fabiola Paz & Annalaura Alifuoco, Samuel Kennedy, Liz Sandford Richardson, E-SCIENCE
When: Saturday 8th June, 2pm – 1am
Where: The Flying Dutchman, 156 Wells Ways, Camberwell, London SE5 7SY
Transport: Burgess Park stop bus 343/N43 or nearby Wyndham Road stop 12, 35, 40, 45, 68, 148, 171, 176 or Vestry Road stop 36, 345, 436
Website:
http://www.flyingdutchmanlondon.com/
http://www.performancespace.org/
ukdecay.co.uk
Twitter: @Fly_Dutch_Lon @aplaceofaction @Franko_B_artist
]performance s p a c e[ aims to cultivate live work that critically and physically pushes the boundaries of body and space. It is a place where work can unfold without restraints of censorship, duration or space; committed to supporting challenging and difficult work that embraces performance art as an ever-evolving medium.
Entry: suggested donation.
All the money raised will go to ]performance s p a c e [ to support the continued delivery of ]performance 1 0 1 [. This part of the ]performance s p a c e [ programme runs across 2013 offering artists open platforms to present live work, discuss & develop their work and participate in dynamic research events. ]performance 1 0 1 [ is open to all and free of charge. It does not receive financial support or funding. 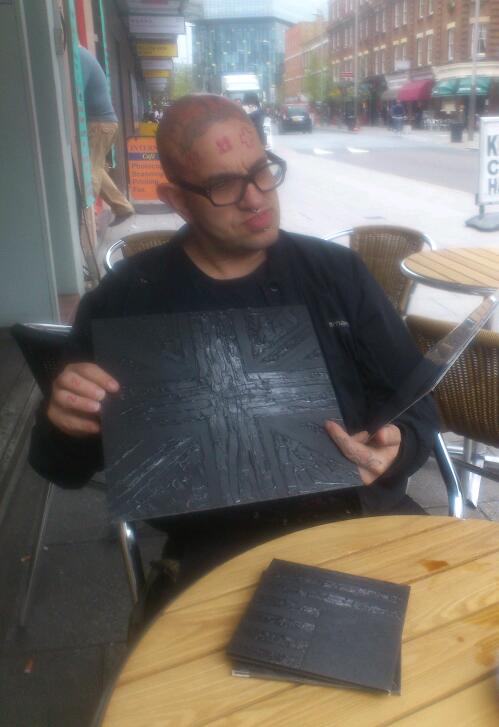 Franko b man-handles New Hope For The Dead!