Notes ; 7 inch single in wraparound sleeve. Unexpected Guest is a different version to the album track. Last release to feature Martyn Segovia Smith. A 12 inch version was advertised in the press, but was never actually pressed.

Notes; 7 inch single in wraparound sleeve. Sexual is the LP version. Eddie Twiggy Branch on bass for this and all subsequent releases. 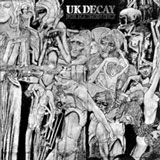 Tracks.
•Duel
•Battle of the Elements
•Shattered
•Stage Struck
•Last in the House of Flames

Later re-issued on UK Decay Records DKLP1. 2 bassists played on the various recording sessions , firstly Creeton Chaos (of US act Social Unrest, who stood in on bass for a US and UK tour spring 81) and then Twiggy. There is also a Japanese version with a Japanese lyric insert (!).on VAP records. 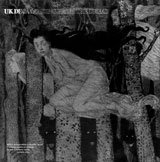 Rising from the Dread EP – (Christ ITS 1)

Tracks.
•Werewolf
•Jerusalem Over (The White Cliffs of Dover)
•Rising from the Dead
•Testament

Rising From the Dread

A Night for Celebration – (DK6)

Tracks Side A:
•Unwind •Werewolf •Dresden •Barbarian •Barbarians •Sexual •Stage Struck •Rising From The Dead •Twist In The Tale
Side B:
•Unexpected Guest •Testament •Black Cat •UK Decay •For My Country •Unwind

A Night for Celebration

For My Country / Unwind Tonight / Sexual / Rising From The Dead

Stagestruck / Duel / Last in the House of Flames / Glass Ice

Notes ; Unwind Tonight and Glass Ice were later re-named Unwind and Shattered on the Fresh releases. These are widely bootlegged but never officially released.

The only otherwise unavailable UK Decay track on a compilation from the early period is an alternate version of For My Country on the Rough Trade Post Punk 01 compilation.

Various other tracks have appeared on compilations over the years, in the 80s there was Unwind on A Fresh Selection and For My Country on Punk and Disorderly. In the 90s a number of Goth compilations have appeared with various UK Decay and In Excelsis tracks , these seem to be cash-ins that I cant be bothered to publicise.

After UK Decay split , there were 2 low-key appearances on compilation albums by Abbo/Twiggy/Steve Harle prior to forming Furyo. Slave Drive by Slave Drive on The Whip and Meat of Youth by Meat of Youth on the Batcave album. I will include full details of these in the Furyo discography , but just to say the track Slave Drive is credited to UK Decay on the CD re-issue of The Whip, which is a bit cheeky and untrue.
PRJ

A collection of early singles, Peel Sessions and rare tracks by UK Decay.

For Madmen Only – Extended version – UK Decay’s classic album augmented with singles and the Rising From The Dread EP.

Tracks: Werewolf, Jerusalem Over (The White Cliffs Of Dover), Rising From The Dead, Testament, Duel, Battle Of The Elements, Shattered, Stage Struck, Last In The House Of Flames, Unexpected Guest, Sexual, Dorian, Decadence, Mayday Malady, For Madmen Only, Barbarian, Black Cat, Unwind, For My Country. 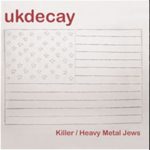 New Hope For The Dead –

Tracks: Shake ‘Em Up, Heavy Metal Jews, Next Generation, Killer, This City Is A Cage, Woman With A Black Heart, Revolutionary Love Song, Shout, All The Faces In History, I Feel Good, Drink.